To date, there are over 1,500 studies proving coconut oil (Cocos nucifera) to be one of the healthiest oil on the planet. Coconut oil benefits and uses go beyond what most people realize. Coconut has long been a primary source of food throughout the tropics. Its various industrial and cosmetic applications have made it a very important commodity. Coconut oil is heat stable, resists rancidity, and has a shelf life of approximately two years or more. The best coconut oil is raw, unrefined, unheated, cold-pressed, “extra virgin” and organic.
World’s renowned expert of fats and oils and the chief expert at the Federal Institute for Fats Research, Germany, and Dr. Johanna Budwig scientifically proved that good quality coconut oil is the best oil for high temperature cooking, e.g. frying and deep frying. It does not change into Trans fatty acids when heated. She recommended only Coconut oil for cooking to her Cancer patients.

The coconut possesses a wide variety of health benefits due to its fiber and nutritional content, but it is the oil that makes it a remarkable source of food and medicine. It has definitely earned its reputation as the healthiest oil in the world despite the fact that its high saturated fat content was once falsely claimed to be unhealthy.

Oils and fats are composed of molecules known as fatty acids. They are classified either according to saturation or based on molecular length and size of the carbon chain within each fatty acid. Monounsaturated fats and polyunsaturated fats are an example of the first class.
The second classification is based on the molecular size or length of the fatty acids carbon chain. Long chains of carbon atoms consist of each fatty acid with an attached hydrogen atom. There are short-chain fatty acids known as SCFA, medium-chain fatty acids (MCFA) such as coconut oil, and long-chain fatty acids (LCFA). The majority of fats and oils in our diet (whether unsaturated or saturated) are composed of long-chain fatty acids.
Coconut oil is a predominantly medium-chain fatty acid (MCFA) and the effects of the MCFA in coconut oil are distinctly different from the LCFA found in other foods. Why is this relevant? It is important because our bodies respond and metabolize each fatty acid differently. It is the MCFA found in coconut oil that makes it unique because these fatty acids do not have a negative effect on cholesterol. In fact, they are known to lower the risk of heart disease and atherosclerosis. There are only a few dietary sources of MCFA, and one of the best sources is coconut oil.
But the people who are blind followers of the FDA and AHA (American Heart Association) will never believe these facts because they have a very narrow and tubular vision where saturation is the only criteria to judge the fats.
Medium-chain fats leave the stomach altogether unaltered and do not need any fat-splitting enzymes or gallic acid for their digestion. These designer and unique fatty acids are small and tender enough to slip easily into mitochondria – the cells’ powerhouses – directly where they can then be converted to energy. Therefore, it is not true that these fats would contribute to arterial calcification. Another reason for the use of coconut fat is the fact that it helps to absorb other substances such as magnesium, calcium, certain B vitamins, fat-soluble vitamins (A, D, E, and K), and even certain proteins. Around 62% of the oils in coconut are made up of these 3 healthy fatty acids and 91% of the fat in coconut oil is healthy saturated fat. These unique fats include:
● Lauric acid
● Caprylic acid
● Capric acid
Coconut oil has many health benefits which are attributed to the presence of lauric acid. Lauric acid is converted into a monoglyceride called monolaurin, a compound that is highly toxic to viruses, bacteria, fungus, and other microorganisms because of its ability to disrupt their lipid membranes and virtually destroy them. Monolaurin is effective for treating candida albicans, fungal infections, and athlete’s foot.
In natural medicine, coconut fat plays an important role in the treatment of inflammation, bacterial and viral infections, and even fungi. The well-known AIDS study conducted by Philippine San Lazaro Hospital showed that coconut fat is able to reduce the viral load and causes the CD4 to increase in AIDS patients. It also has positive effects in such known viruses as influenza, herpes simplex, or the Epstein-Barr virus.
Breast milk is the only other source of lauric acid, which must explain the lesser incidents of infections with breast-fed infants. It has also been observed that regular consumption of coconut oil boosts immunity and reduces incidences of sickness.

Hair Care – The unique MCFAs in coconut oil pass freely into the hair’s cell membrane, allowing for the oil to penetrate the hair’s shaft; this literally does the deep conditioning from within.
Massaging the oil into the scalp can offer relief from dandruff. Dandruff is caused by dry skin or fungal conditions that reached the scalp. With regular use, coconut oil can kill the fungus and eliminate dandruff issues.
Skin Care – Coconut oil is an excellent skin conditioner containing MCFAs, naturally occurring fats which deeply penetrate, moisturize and acts as a protective barrier against environmental and free radical damage. The oil also provides sun protection by screening 20 percent of ultraviolet exposure.
Coconut oil is rich in anti-oxidants and the natural antibacterial agents caprylic and capric acids. Its ability to smooth the skin while infusing it with anti-oxidants makes it a perfect anti-aging moisturizer. Moreover, it contains vitamin E, another antioxidant popular for hastening the recovery of skin abrasions, burns, and other trauma.
Weight Loss – Medium-chain fatty acids found in coconut oil can speed up metabolism three times faster than long-chain fatty acids because they are easily digested and converted into energy.
Hypothyroidism – Coconut oil has been found to be very helpful for people who have hypothyroidism. It has been scientifically proved to increase metabolism, encourages weight loss, increase body temperature, relieves constipation and behave as an antioxidant. Thyroid patients often experience muscle and joint pain due to inflammation from unbalanced hormone levels. Coconut oil naturally suppresses inflammation and helps to repair tissues and fight pain.
Low thyroid hormones in the body can cause dry skin. coconut oil helps to restore the lost moisture and improve skin health. A thyroid disorder can also affect the hair follicles. Lauric acid provides the protein required by hair to stay healthy and strong, to reduce hair loss. Use extra virgin and organic Coconut oil. The amount varies between 3 to 6 tablespoons a day.
It should be noted that ninety-three percent of American soy is GMO. This highly processed soy has been linked to thyroid damage and hormone disruption due to its large quantities of estrogen-like compounds called phytoestrogens.
Natural remedy for Pneumonia – In a study presented before The American College of Chest Physicians on October 29, 2008, coconut oil was found to offer pneumonia patients faster and more complete relief from symptoms.
Diabetes, Heart Disease, and Cholesterol levels – In a study made on women subjects ranging from 20 to 40 years old, half of the subjects were instructed to take a 30 ml soybean oil supplement while the other half were instructed to take a 30 ml coconut oil supplement while maintaining moderate exercise routine over a 12 week period. Results of the study showed that although both groups of women had a decrease in body mass index (BMI), only the women who were taking coconut oil showed a notable decrease in waist circumference significantly lowering the risk of conditions like type II diabetes and heart disease.
Furthermore, the study also showed that the subjects who experienced an improvement in their cholesterol profile along with higher HDL levels and higher HDL/LDL ratio were the ones taking coconut oil. That taking soybean oil did not receive the same benefits but reflected higher total cholesterol as well as higher LDL cholesterol, lower HDL cholesterol, and a lower HDL/LDL ratio.
Bone health and Chronic fatigue – Coconut oil helps prevent osteoporosis because it helps in the nutrient absorption of minerals such as calcium and magnesium – important minerals that fight osteoporosis. Moreover, the MCFAs in coconut oil produce energy rather than body fat, thereby improving metabolism and preventing fatigue.
Alzheimer’s Disease – Dr. Mary Newport gave her husband 1 Tbsp. of coconut oil, twice a day for a month and a half, and saw him almost completely recovered from dementia.
A plethora of other health benefits
● Protects against cancer, HIV, and other infectious diseases
● Kills bacteria and parasites like tapeworm and liver flukes
● Eases acid reflux, aids in proper bowel function
● Lowers incidence of hemorrhoids
● Heals and relieves intestinal problems
● Soothes earaches
● Deals with symptoms connected with prostate enlargement
● Strengthens the liver and protects against degeneration
● Reduces incidence of epileptic seizures
● Reduces joint and muscle inflammation
● Eases neuropathies and itching from diabetes.
Dose of Coconut Oil to enjoy its benefits
There is no real dose of recommended coconut oil, but research has shown that one should consume several grams of lauric acid, or at least 1 Tbsp of coconut oil, every day. Certainly, 10 g to 20 g of lauric acid taken daily can be a benefit to health. Coconut oil contains 50 percent lauric acid, so taking 1 tablespoon of coconut oil per day will provide you with 7g lauric acid. An appropriate dose should therefore be in the region of one to three tablespoons daily. 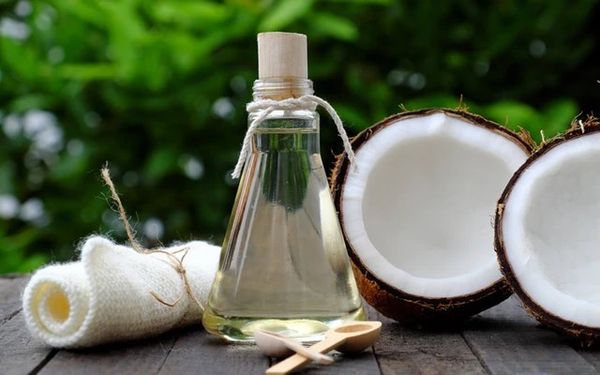