Pancreas, compound gland that discharges digestive enzymes into the gut and secretes the hormones insulin and glucagon, vital in carbohydrate (sugar) metabolism, into the bloodstream.
The cells in the pancreas that produce digestive enzymes are called acinar cells (from Latin acinus, meaning “grape”), so named because the cells aggregate to form bundles that resemble a cluster of grapes. Located between the clusters of acinar cells are scattered patches of another type of secretory tissue, collectively known as the islets of Langerhans, named for the 19th-century German pathologist Paul Langerhans. The islets carry out the endocrine functions of the pancreas, though they account for only 1 to 2 percent of pancreatic tissue.
A large main duct, the duct of Wirsung, collects pancreatic juice and empties it into the duodenum. In many individuals, a smaller duct (the duct of Santorini) also empties into the duodenum. Enzymes active in the digestion of carbohydrates, fat, and protein continuously flow from the pancreas through these ducts. Their flow is controlled by the vagus nerve and by the hormones secretin and cholecystokinin, which are produced in the intestinal mucosa. When food enters the duodenum, secretin and cholecystokinin are released into the bloodstream by secretory cells of the duodenum. When these hormones reach the pancreas, the pancreatic cells are stimulated to produce and release large amounts of water, bicarbonate, and digestive enzymes, which then flow into the intestine.

The pancreas secretes a magnificent array of enzymes that collectively have the capacity to reduce virtually all digestible food molecules into forms that are capable of, or nearly capable of being absorbed. Three major groups of enzymes are critical to efficient digestion:

Digestion of proteins is initiated by pepsin in the stomach, but the bulk of protein digestion is due to the pancreatic proteases. Several proteases are synthesized in the pancreas and secreted into the lumen of the small intestine. The two major pancreatic proteases are trypsin and chymotrypsin, which are synthesized and packaged into secretory vesicles as the inactive proenzymes trypsinogen and chymotrypsinogen.
Once trypsinogen and chymotrypsinogen are released into the lumen of the small intestine, they must be converted into their active forms in order to digest proteins. Trypsinogen is activated by the enzyme enterokinase, which is embedded in the intestinal mucosa.
Once trypsin is formed it activates chymotrypsinogen, as well as additional molecules of trypsinogen. The net result is a rather explosive appearance of active protease once the pancreatic secretions reach the small intestine.
Trypsin and chymotrypsin digest proteins into peptides and peptides into smaller peptides, but they cannot digest proteins and peptides to single amino acids. Some of the other proteases from the pancreas, for instance, carboxypeptidase, have that ability, but the final digestion of peptides into amino acids is largely the effect of peptidases on the surface of small intestinal epithelial cells.

A major component of dietary fat is triglyceride or neutral lipid. A triglyceride molecule cannot be directly absorbed across the intestinal mucosa. Rather, it must first be converted into a monoglyceride and two free fatty acids by the enzyme lipase are delivered into the lumen of the gut as a constituent of pancreatic juice.
Sufficient quantities of bile salts must also be present in the lumen of the intestine in order for lipase to efficiently digest dietary triglyceride and for the resulting fatty acids and monoglyceride to be absorbed. This means that normal digestion and absorption of dietary fat are critically dependent on secretions from both the pancreas and liver.

The major dietary carbohydrate is starch, a storage form of glucose in plants. Amylase is the enzyme that converts starch to maltose (a glucose-glucose disaccharide), as well as the trisaccharide maltotriose. The major source of amylase in all species is pancreatic secretions, although amylase is also present in saliva.

In addition to the proteases, lipase, and amylase, the pancreas produces a host of other digestive enzymes, including ribonuclease, deoxyribonuclease, phospholipase, and cholesterase. 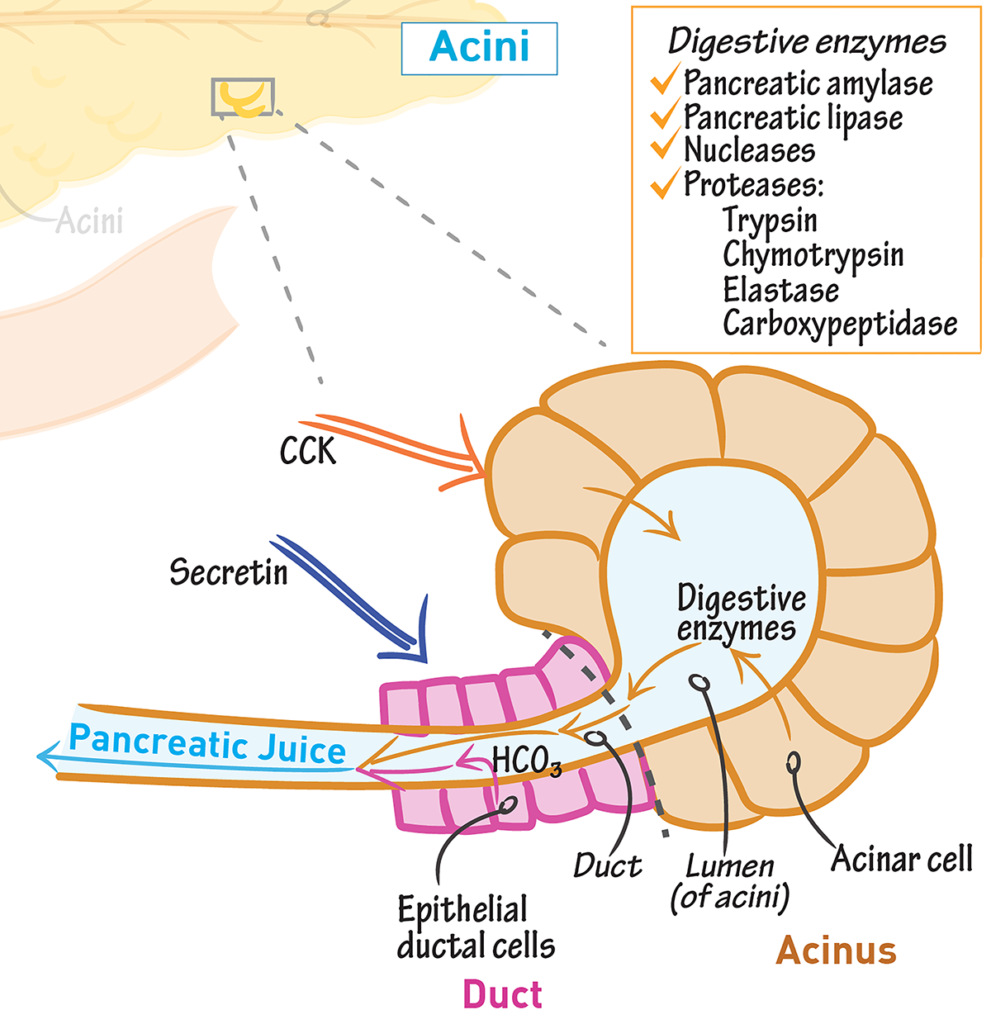