Tran’s fat or Trans-unsaturated fatty acid is a man-made, toxic, inedible and imitation fat. This is a type of damaged  unsaturated fat, uncommon in nature, but produced in factories from cheap vegetable oils for use in margarine, snack food, packaged baked goods and frying food.

The natural unsaturated fatty acids (sis fatty acids) have high energy pi-electrons while Tran’s Fats don’t have healing pi-electrons. This is the main difference between sis and Tran’s fats, but no body dares to document this fact.

Fats contain a long hydrocarbon chain, which can either be unsaturated, i.e. have double bonds, or saturated, i.e. have no double bonds. The unsaturated bonds cause the normally straight line shape of the carbon chain to bend at the double bonded pair because nature always removes the hydrogen atoms from the same side of the fatty acid molecule. This greatly changes the fatty acids physical and chemical characteristics. Biochemists call this cis-configuration.

While in Tran’s fat hydrogen atoms are on the opposite side of the double bonds of the carbon chain, making the fat molecule to remain straight. It is solid at room temperature.

Hydrogenation is the process of passing hydrogen gas at very high temperature through the oil to change its consistency, in presence of a catalyst nickel. As the hydrogen passes through, the oil begins to become solid. Full hydrogenation of vegetable oils would produce exclusively saturated fatty acids that are too waxy and solid to use in food production. So manufacturers obtain “partial hydrogenation” by stopping the hydrogenation part of the way through. This looks, feels and spreads like butter, but much cheaper to produce. It is sold as “margarine” or “vegetable shortening “. Partial hydrogenation of the unsaturated fat converts some of the cis double bonds into Tran’s double bonds, which produce Tran’s fats. Consumption of Tran’s fats has shown to increase the risk of coronary heart disease and promote chronic inflammation in the body.

Tran’s fats also occur naturally in a limited number of cases. Vaccenyl and Conjugated linoleic acid (CLA) containing Trans fats may occur naturally in trace amounts in meat and dairy products, but these are not harmful. Two Canadian studies have shown that the natural Trans fat vaccenic acid, found in beef and dairy products, were actually beneficial compared to hydrogenated vegetable shortening, or a mixture of pork lard and soy fat,  by lowering total and LDL and triglyceride levels.

It’s interesting to see that the seed of tragic tale of Trans fats was sown close to a century ago when Paul Sabatier was awarded a Noble Prize for developing the chemistry of hydrogenation. Though he considered hydrogenation of only vapors, the German chemist Wilhelm Norman  showed in 1901 that liquid oils could also be hydrogenated, and he patented this process in 1902. 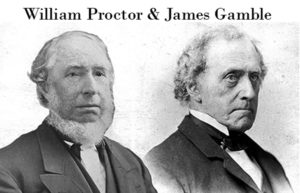 Then candle maker William Proctor and his brother-in-law, soap-maker James Gamble, joined together and formed a new company – Proctor and Gamble in Cincinnati, Ohio. P & G acquired the US rights to the Norman  patent and began producing the first hydrogenated  shortening from Cottonseed Oil in 1911. This was named Crisco, derived from CRYStalized Cottonseed Oil.  After a couple of decades Proctor and Gamble replaced the cottonseed oil with genetically modified soybean oil and fully hydrogenated palm oil.

Crisco was presented as healthier, more digestible, cleaner, more economical, more enlightened and more modern than lard. Women who use Crisco are portrayed as good wives and mothers, their houses are free of strong cooking odors and their children grow up with good characters. With one sentence, P & G had taken on its two closest competitors—lard and butter.  To attract Jews a new slogan was framed: “The Hebrew Race had been waiting 4,000 years for Crisco!” 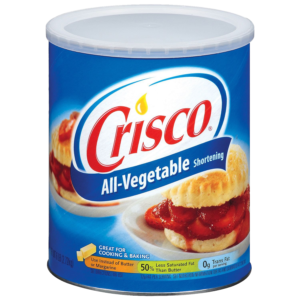 Through highly deceptive but successful and intense marketing, this deadly and imitation fat had gradually and insidiously replaced many of our delicious and healthy traditional foods. Sale of shortening and its cousin, margarine, took off for obvious reasons – who wouldn’t want a butter substitute that was cheaper, had longer shelf life, and came with free cookbooks (All the recipes required Crisco, of course)? May be P & G initially did not know that Crisco would be so dangerous for human race.

The advent of Crisco on the shelves and kitchens, whole world was thrown into the era of the greatest chronic inflammation! When evidence began to appear about problems of heart disease, cancer, diabetes, and arthritis, the greedy P & G worked behind the scenes to cover them up. One of puppet scientists who worked for P & G, Dr. Fred Mattson, presented the US government’s inconclusive Lipid Research Clinical Trials to the public as proof that it is the animal fat, not the margarine that caused heart disease. He also persuaded the American Heart Association to preach the spurious gospel of the Lipid Hypothesis.”

But reality was entirely different. Trans fat was the main culprit behind the world-wide epidemic of heart disease, cancer, type-2 diabetes and other chronic diseases. Before the era of Crisco these diseases were very rare. While these oil companies were celebrating their success, people were dying from heart infarction, diabetes and cancer. A great crime had happened against whole human race.  Media and FDA remained silent for almost a century. Even doctors did not define the Tran’s fats clearly

Why Tran’s fat is so unhealthy? How natural and essential fatty acids (EFAs) differ from this deadly fat? To know all this we have to understand the great discovery done by Dr. Johanna Budwig. She was Senior Expert at Federal Institute for fats and drugs in Germany. She was known as Omega-3 Lady. She was the first to highlight the benefits of “omega-3” and the evils of Tran’s fat, which are even being “rediscovered” today; but her name remains virtually unknown to scientists, the media and the general public.

In 1949, she developed Paper Chromatography to identify and study essential fatty acids (EFAs). With this technique she isolated and visualized the highly unsaturated and vital EFAs – cis Linoleic and cis Linolenic fatty acids. The cis- configuration allows de-localized electron clouds (pi-electrons) to form in the bend produced on the chain. The negatively charged pi-electrons produce electromagnetic force and enables the EFAs to capture oxygen and hold proteins within cell membranes. Pi-electrons are extremely important to the body’s overall energy exchange potential — the flow of life force. The pi-electrons in the cell membranes increase the cells ability to store and receive electrons from the sun, through resonance. According to mathematical calculation of quantum physics, the “human” possesses the highest potency of electrons from the sun, always striving toward the future against entropy. The concept of “anti-human” — the mirror image of this human being — has already been coined. Anti-human is electron-poor, directed into the past, paralyzed in his life functions also his thinking, lacks energy and strength because he is missing the electrons that are in harmony with the sun as “life-element.” The Tran’s fats lacking in pi-electrons takes you to disease and hell. Budwig always preached against use of deadly Tran’s fats with sound scientific proof, but her suggestions were ignored.

I have detected Trans fat particles in oils treated with steam, which indeed are unsaturated fats and have double bonds, but are highly toxic for man. – Johanna Budwig

The Trans fats cause chronic inflammation and dysfunction in our body on a cellular level. These have been linked to:

●   Cancer: They interfere with enzymes your body uses to fight cancer.

●   Diabetes: They interfere with the insulin receptors in your cell membranes.

●   Problems with reproduction: They reduce the production of sex hormones.

●   Heart disease – Trans fats can cause blocking of your heart arteries.

Trans fats even interfere with your body’s use of beneficial omega-3 fats, and have been linked to an increase in asthma.

What type of foods have Tran’s fat?

●   Processed foods like baked and frozen products are most likely to contain Tran’s fat.

After lot of pressure from people, FDA awakes from decade long sleep and finally admits that Tran’s fat is very dangerous for human health. FDA now accepts that Trans fat do not meet their distinction of “generally recognized as safe” for human consumption. Until recently FDA had been preaching against the use of saturated fats, because it causes heart disease, diabetes and other chronic diseases.

In March 2003, Denmark became the first country to pass strict regulations on the sale of foods containing Tran’s fats. No more than two per cent of the fats and oils in any food product can contain Trans fats. The legislation effectively limits people’s Tran’s fat intake to less than one gram per day. Later on, Canada and Switzerland passed similar regulations.

On Dec. 5, 2006, New York City’s board of health approved a ban on Tran’s fats in all restaurants across the city. The ban took effect in June 2008.

In 2013, the Food and Drug Administration began to gradually stop the use of Tran’s fats in all foods. It said there is no safe amount that should be in food eaten by humans. In June 2015, the FDA issued a final warning, that Tran’s fats are not safe for any use in human food. Tran’s fat must be taken out of all food production within three years. The FDA says the ban will cost the food industry $6.2 billion over 20 years. The food industry must use new formulas and recipes using ingredients without Tran’s fat. This is a great victory for all those scientists and people including Dr. Johanna Budwig (She must be smiling in the heaven) and professor Kummerow.

No one was more pleased by the FDA’s decision to eliminate artificial Trans fats from the U.S. food supply than Fred Kummerow, a 100 year old University of Illinois professor who has warned about the dangers of  the artery clogging substance for nearly six decades. He filed a petition with the FDA in 2009, citing the mounting body of evidence against Tran’s fat.

If you want to avoid dangerous fats of all kinds, your best bet is to eliminate processed foods from your diet. Use butter instead of margarines and vegetable oil spreads. Use coconut oil for cooking. It is far superior to any other cooking oil and is loaded with health benefits.